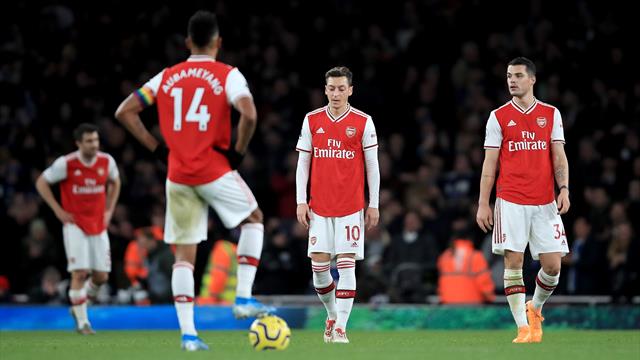 Following the sacking of Quique Sanchez Flores at the beginning of this month, Watford have announced the appointment of Nigel Pearson as their new manager on a contract running to the end of the season.

Watford's Chairman and CEO Scott Duxbury said of the former Leicester CIty boss: "Nigel is an impressive coach and comes with all of the experience and success we believe can have a very positive impact on our season."

Barcelona boss Ernesto Valverde was breaking hearts today as he reminded the world that while not immediately on the horizon, Lionel Messi's retirement is "in the air."

The full story is here: https://www.eurosport.co.uk/football/liga/2018-2019/messi-retirement-date-not-far-away-warns-valverde_sto7565800/story.shtml

Speaking at an event on Friday he said: "It's a very difficult competition, but he is a very good coach with a great team at his disposal so they can break through at any moment."

Jose Mourinho has said he wants his players to be angry, rather than sad, in defeat and was concerned with their reaction to losing to Manchester United in midweek.

“One of the things I said was that I saw a sad dressing room, a sad plane [on the way home], and that’s not what I like after a defeat,” he said. “You have to be more than that. You have to be raging, angry, not sad. Being sad will not resolve your problems. You need that mentality."

With an even busier Christmas period than usual approaching, Jurgen Klopp has promised to keep shuffling his players to keep them fresh.

"When you are a football supporter you have your 'best 11' and you want them to play all the time but it is not FIFA or Playstation.

"We have to do these kind of changes. If we have the opportunity, we will do it."

With two of Mikel Arteta's former clubs, Arsenal and Everton, in the hunt for a new manager, there has been plenty of speculation that the Spaniard could leave his post as Pep Guardiola's assistant.

The Man City manager was quizzed about his number two's future: "He travelled to Burnley (on Tuesday) and tomorrow he will be close to me again against United. He will be here until the end of the season, I think so.

"Hopefully he can stay this season and the next one - as long as possible in this club. That would be my dream, but Mikel has his own life and I will never say what he has to do."

You can't blame accuse Gareth Bale of not being able multi-task. We're sure the Madrid press will love this...

Brendan Rodgers has put an end to speculation linking him with the Arsenal job by signing a contract that will keep him at Leicester until 2025.

11:50 - Solskjaer calls for Rashford to step up

Ole Gunnar Solskjaer has called on Marcus Rashford to continue his good goalscoring run and become one of the Premier League's most consistent marksmen.

"He is doing that at the moment," Solskjaer said. "He's doing it consistently now, scoring 10 in the last 11, but it's not like four in one and two or three without. It's not just in spurts but he's consistently getting chances, and into better positions, and on Wednesday night he was unbelievable. I hope to see that again."

Chelsea are free to spend money in the January transfer window after the Court of Arbitration for Sport ruled that their ban should be halved. More on that here.

Everton are on the hunt for a new manager but Eddie Howe is in no way interested in leaving Bournemouth for Goodison Park.

"First of all, I am very disappointed for Marco," Howe said. "Secondly, I am 100% committed to this club and I am a little bit embarrassed with the speculation, if I am honest, after our recent run of results."

Arsenal legend Tony Adams believes his old club's problems can be put down to a lack of desire and bravery and that the players are in need of a coach to give them a good old fashioned talking to.

"They need brave people on and off the pitch. You need a bit of honesty here, and a coach to go ‘hold on a minute, come on guys’. You need to be called out. And I don’t think a lot of that has been going on.

09:30 - Bellerin confident of upturn in form

Arsenal were booed off against Brighton but Hector Bellerin insists that he and his team-mates gave their all and will soon turn things around.

"When we come out on that pitch, everyone wants to win. Everyone wants to give their best for that shirt. Sometimes I don’t know, as I say, it’s hard to say it. I felt like, especially in the second half, the team was full of energy, we had a goal disallowed – which was rightly disallowed anyway – but as I say it’s just hard to take for us. We need to keep going, we cannot give up, we need to keep playing like the second half and I’m sure 100% the results will come."

After Arsenal contrived to lose to a team with a woeful away record and Spurs' feel-good start under Jose Mourinho came to an abrupt end, the Warm-Up muses on

"Put simply, neither of these entities can play football"

That's all from us for today, but join us again tomorrow for all the top headlines from the world of football.

Meanwhile, you can follow our dedicated live blog of Arsenal vs Brighton here.

17:15 - Foster: "Watford can avoid relegation with an English coach"

Watford can improve their performances and avoid relegation from the Premier League if they appoint an English head coach to take over from the sacked Spaniard Quique Sanchez Flores, goalkeeper Ben Foster has said.

"I think the fact that we have got an English core of players - the spine of the team is English... It would suit us massively," Foster was quoted as saying by the London Evening Standard

"The only way we are going to get out of the trouble we are in at the minute is by fight and grit and determination, and being dirty and clever, using your nous a bit more."

Barcelona have handed their youngest ever league goalscorer Ansu Fati a new contract until 2022 and raised his buy-out clause to €170 million, the Spanish champions said in a statement on Wednesday.

Fati was catapulted into the first team in August due to a spate of injuries and entered the history books by scoring in a 2-2 draw with Osasuna aged 16 and 304 days, overtaking Bojan Krkic as Barca's youngest scorer in a La Liga match.

15:30 - Cardiff City appeal to CAS over verdict in Sala case

Cardiff City have appealed against the decision ordering them to pay six million euros ($6.61 million) to Nantes for the transfer of Emiliano Sala, who died in a plane crash on his way to join the Welsh club.

In October, FIFA ordered Cardiff to play a six million-euro sum, relating to the first instalment of his transfer fee, to the French club.

"Cardiff City FC seeks to have the (decision) set aside and requests the CAS to declare that no amount shall be payable by Cardiff City FC to FC Nantes," said CAS in a statement

Gareth Bale was absent from Thursday's training session and according to Marca he will miss Saturday's La Liga match with Espanyol as well as Wednesday's Champions League game at Club Bruges due to a hamstring strain.

Real have not released any information on Bale's injury but they said on Thursday that defender Marcelo has sustained a calf injury.

Marca reported that the Brazilian is also in danger of missing the 'Clasico' at the Camp Nou on Dec. 18, which has been rescheduled over political unrest in Barcelona.

Real are unbeaten in eight games in all competitions and are second in La Liga on 31 points, level with Barca who are top on goal difference.

Corriere dello Sport editor Ivan Zazzaroni has released a statement on his paper's website regarding the 'Black Friday' story run on its front page.

" It's an innocent article, perfectly argued by (journalist) Roberto Perrone, that has been made poisonous by those who have poison inside them."

Real Madrid's Eden Hazard is expected to miss El Clasico in a fortnight after fracturing his ankle.

Or as Real Madrid's website puts it: "The development of the perimalleolar bruising in his right leg has seen him diagonsed with an incomplete external microfracture in the aforementioned area."

Lionel Messi has claimed Sadio Mane would have been his pick for the 2019 Ballon d'Or.

"It’s a shame to see Mane finish in fourth place," Messi, who won the award for a sixth time, told Canal+.

"But I think there have been a lot of great players this year. That’s why it was difficult to choose a particular player. But I chose Sadio Mane because he’s a player that I like.

"Mane achieved a great year that was exceptional for the entire Liverpool team. That’s why I chose him. I repeat, there were a lot of very great players this year, so the choice was difficult."

10:45 - Inter: We are and always will be opposed to any form of discrimination

An Italian newspaper has been condemned for running the headline ‘Black Friday’ alongside pictures of Romelu Lukaku and Chris Smalling.

Inter face Roma in Serie A on Friday, in a match which sees former Manchester United team-mates Lukaku and Smalling go head to head.

Corriere dello Sport ran with the ‘Black Friday’ headline for its Thursday edition, a move which was labelled “tone deaf with the usual racial undertones”.

Frank Lampard said he was happy but wants more from his Chelsea side after they got back to winning ways with a 2-1 victory over Aston Villa on Wednesday to consolidate fourth spot in the Premier League.

"I am happy but I want more," Lampard, whose side are six points clear of fifth-placed Wolverhampton Wanderers, told reporters. "We have had a pretty good start because most people probably expected us otherwise.

"But I want more all the time and I think that the last week has been a good example of that for us.

"I saw us go to Manchester City and trade with them like a big team who was in and around that level, then at West Ham we were not. Today we recovered.

"That shows me where we are to have a real potential to getting where we want to be, but also aware of the little tough bumps in the road."

Video - Lampard: ‘Chelsea bounced back well but must be more clinical’

09:33 - Solskjaer: United were the best they’ve been this season

Video - Solskjaer: ‘Manchester United were the best they’ve been this season’

"You can almost say he is undroppable at the moment," Solskjaer told reporters. "The physical presence he gives us, the leadership he gives us in midfield, he also releases Fred."

Spurs manager Jose Mourinho, who gave McTominay his breakthrough at United, said the Scottish midfielder was the difference between the two sides.

"They had more emotion than us," the Portuguese coach said. "You see for example, McTominay's performance ... he was dominant. He was dominant."

A bold team selection saw Jurgen Klopp start both Divock Origi and Xherdan Shaqiri, with Mohamed Salah and Roberto Firmino on the bench. Safe to say the gamble paid off with Origi scoring twice and Shaqiri also on target. Here's Klopp praising the striker that loves to turn up for the big occasions...

They couldn't... could they?

Video - Silva ‘cannot answer’ about his future as Everton manager

Morning all. We'll look at the best Premier League reaction from last night's matches in due course...

But could this be the day Everton dismiss Marco Silva? A 5-2 defeat at Liverpool has left them in the bottom three. An eighth defeat in 11 games.

BBC Sport claims he faces the sack, with Sky Sports News adding that David Moyes is in line for a Goodison Park return. Let's see how the day unfolds...