Captain Kerr looks to get the Matildas waltzing at World Cup 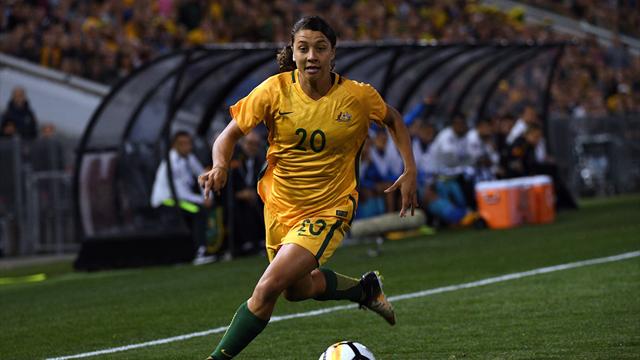 There is a good case for ranking Sam Kerr as Australia's best footballer, female or male, at the moment and the country's hopes of a first World Cup triumph in France in July rest in no small part upon the prolific striker's shoulders.

No Australian player has come close to enjoying the 25-year-old's profile -- with her 130,000 social media followers, Nike endorsement and other commercial deals -- since Socceroos forward Tim Cahill hung up his boots.

Great careers are not built on profile alone, however, and at her third World Cup, Kerr has a chance to truly cement her place among the game's best.

Goals are the gold standard by which strikers are judged and Kerr, who made her debut for Australia as a 15-year-old in 2009, has been banging them in from all over the park.

The second time she found the net for her country was against North Korea in the 2010 Asian Cup final, a cool finish for Australia's only goal of the game as the Matildas won their first major trophy on penalties.

She has scored 30 more for Australia since and is as prolific in club football, winning the golden boot in both Australia's W-League and the National Women's Soccer League in the United States for the last two seasons.

Blessed with blistering pace and devastating in front of goal with both her head and her almost unerringly accurate right foot, the 2017 Asian Player of the Year will test any defence.

In another sign of her burgeoning reputation, Kerr was named Australia's captain earlier this year, with coach Ante Milicic confident she has the leadership skills to succeed.

"She's very respected in the world game and I think we have to be proud... and really embrace that, because she's still got a lot of good football in front of her," Milicic said.

"I've been to two World Cups with the men's team as well. I've worked with some fantastic leaders ... I see a lot of those leadership qualities in Sammy."

Kerr's Kolkata-born father Roger and brother Daniel played Australian Rules professionally and while the indigenous football code was her first love, it was soccer that offered her a chance to pursue her own career in sport.

Her hard work and intense focus belie her joy at being able to play the game for a living -- evident in her trademark goal celebration of a cartwheel and backflip.

"I always just try to have fun, whatever I'm doing, and that's something I do on the field too," she said earlier this year. "It's an honour to be at a World Cup - and it's a moment I've lived for my whole life.

"Hopefully I can have a good impact on the team. There's no pressure from outside -- other than the pressure I put on myself."

Australia kick off their World Cup campaign against Italy in Valenciennes on June 9. (Reporting by Nick Mulvenney; Editing by Simon Jennings)