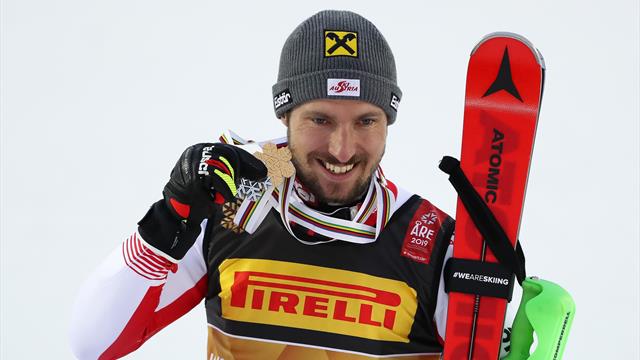 Marcel Hirscher was in a class of his own on Sunday as he won his third Slalom gold at the World Championships leading an Austrian clean sweep of the medals.

The 29-year-old led the pace from the opening run, finishing 0.56 ahead of his nearest rival, France's Alexis Pinturault and he never let up in the second run.

Coming into his second attempt the leader was compatriot Michael Matt, with a total time of 2:06.51.

Despite a couple of little wobbles, Hirscher never looked troubled and although his second run was far from stellar he had done more than enough in his first attempt, finishing with a total time of 2:05.86.

It is Hirscher’s seventh overall World Championship gold, drawing him level with Austrian legend Toni Sailer with the most titles for men and it gives him back-to-back titles after victory in 2017.

The World Cup leader has been struggling with illness throughout the Championships and he was quick to pay tribute to his team for their hard work.

“Today it was much better than four days ago but I want to thank my whole team because they made it possible." Hirscher said.

"They worked really hard to bring me to the starting gate so thanks to them for that.

“I knew that Alexis was not in the lead so in the first part I tried to push it really, really hard and then there were two or three gates where it was bumpy.

Video - Hirscher pays tribute to team and speculates over future

“Our president is here, he is jumping around and having fun so everything is good.”

Hirscher’s compatriot Matt had to settle for silver after an excellent second run with fellow Austrian Marco Schwarz rounding off the top three.

However, he showed incredible poise to recover and shoot down the slope to finish in fourth.

One of the best turnarounds came from Great Britain’s Dave Ryding as he finished ninth.

Looking to build on a disappointing first run The Rocket flew out of the gate in his second attempt, clocking a time of 1:03.31, the third best time on the second run.

This was enough for him to sit in the leader’s enclose for a good period of time before he was overtaken by Switzerland’s Ramon Zenhaeusern.

However 9th place represents a fantastic day’s work for Ryding, it is his best finish at the World Championships.

Defending world Slalom champion Marcel Hirscher put in a fantastic opening run to take the lead in the men’s competition on Sunday at Åre.

Hirscher, the 2017 winner, was third to run and instantly found the perfect line on the snow and found an extra gear compared to his competitors.

His time of 1:00.60 put him 1.70 seconds clear at the time, blowing away Clement Noel and Henrik Kristoffersen.

Video - 'Breathtaking!' - Hirscher goes 1.7secs ahead of field in Slalom

The time put between himself and Kristoffersen will be particularly sweet for the 29-year-old Hirscher, after his young rival from Norway beat him to gold in the Giant Slalom.

As the rest of the competition took to the snow the only rider who get close to Hirscher’s time was Alexis Pinturault, who finished 0.56 back from the Austrian.

It was a fantastic opening run for the Austrians in general as Marco Schwarz currently sits in the bronze medal position with Michael Matt and Manuel Feller rounding off the top five as well as Christian Hirschbuhl in eighth.

Olympic champion Andre Myhrer, who has struggled for form all season, was a way off Hirscher in front of his home crowd, clocking a time of 1:02.88, 2.28 behind the leader.

Great Britain’s Dave Ryding started with a good pace but like other riders he was caught out by some segments later on down the course and finished 1:03.72.